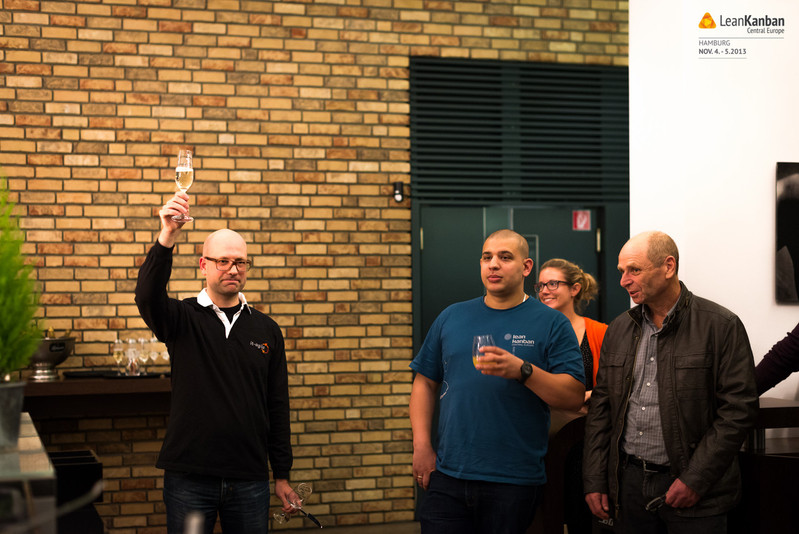 überproduct not only goes on vacation occasionally, no we also were traveling on company business last week to visit the LKCE 2013. To us it was business travel because we gave a talk there and were active in the program committee and also moderated some sessions. But much more it was a business trip because we believe in live long learning– and indeed we wanted to know even more about Kanban, because it again and again helps us to deliver our stuff.

So, fine, enough of the talking – what did we actually learn? The main thing was that the top of the Kanban movement is less and less concerned with the actual mechanics of the Kanban board. It is less about the white board with stickies and more about modern management methods and the values behind it. Mainly a the group of David Joyce (who sadly couldn’t make it to Hamburg, but whom I saw in Berlin a couple of weeks ago). Mike Burrows and Karl Scotland is deeply involved with discovering and discussing the values behind Kanban and Lean. And indeed being concerned about the right values is a tradition in Lean. Reading Taiichi Ohno (also Deming), one will realize that Lean – and thus also Kanban – was always based on the deep respect for the workers. This is exactly what shows the first conflict in most Kanban implementations in companies that Kanban brings with it that it is not about being right by position but about being right about facts in proven in experiments. And these facts then lead to better decisions than the usual ones, which are based on politics, power or habits. 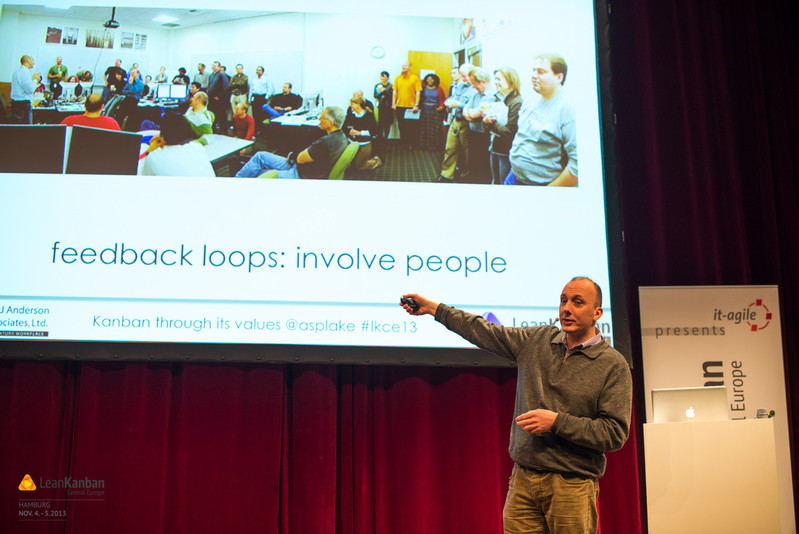 Another trend we spotted was Change in the enterprise. And this means Change with Kanban being the catalyst towards continuous improvement in the enterprise. Here, the values mentioned above, help to let change happen into the right direction and thus create a learning organization that learns to improve itself – most of the time in small steps, day by day. If required, practicing small steps also helps to digest radical change from time to time. This trend is very well represented by Klaus Leopold and Sigi Kaltenegger. 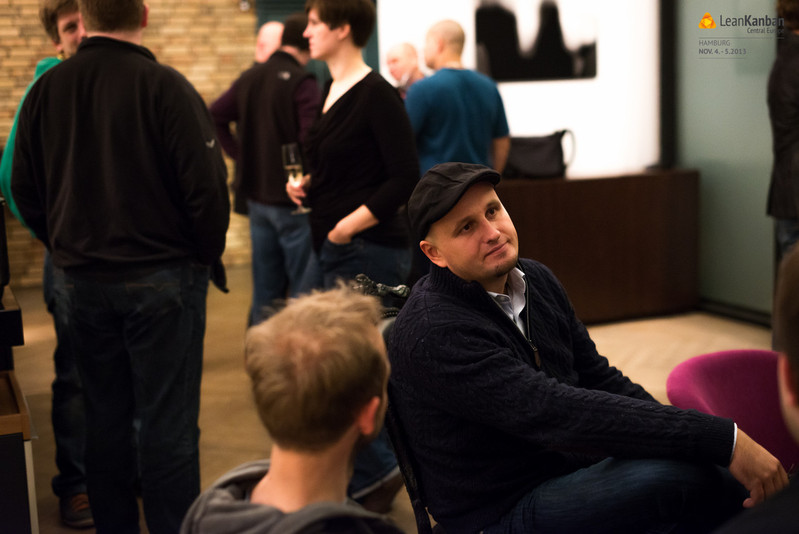 Another movement, being of more theoretical nature, is about the foundations of decision-making, based on complexity theory, logic and psychology. It takes into account the results of Dave Snowden (Cynefin, complexity), Daniel Kahnemann. Snowden brings us the finding that large parts of knowledge work takes place in the complex domain, meaning that there is no clear cause-effect relationship. It also says that the innovative change (and the new in general) takes place in the complex, but will be leveraged in the complicated domain. Thus, teams and working conditions have to permanently change between complex and complicated. It also means that we are surrounded by uncertainties, which will bring up a different kind of working. The same is expressed by another perspective where one can say that existing knowledge is happening in inductive and deductive reasoning, but the new is happening in abductive reasoning. This was explained in depth by Jabe Bloom. Kahnemann takes this on the psychological level and shows how bad human beings are in rational decisions and how deeply our decisions are flawed by bias and the strange conflict between system 1 and system 2 thinking. 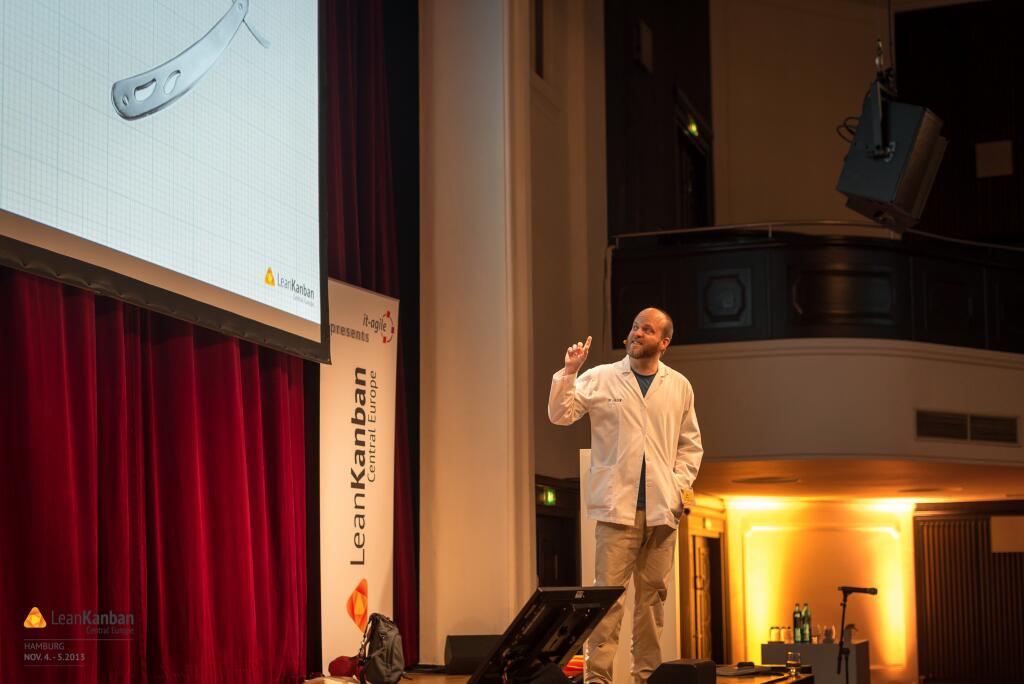 Some will surely be bothered by the Kanban avant-garde getting more and more into the theory behind Kanban – at least at the conferences. But I have to confess that I like that trend very much. And here’s the reason: My experience is that the pure adoption of practices and their repetition (e.g. in the Shu-Ha-Ri model) does not automatically lead to a deeper understanding of the real purpose and an advanced ‘how’ of the realization. I had to watch quite a few organizations in which Agile was just another dogma, far away from its original meaning and purpose: Just a broken down waterfall with the mindset of the waterfall not being replaced and now the Scrum masters being in control mode, knowing what is ‘right and wrong’. Still projects are being known in full before Sprint 1, bugs being monitored in tools, Stories need to be ‘ready’ before the sprint … release plan, road map … you name it. This causes the slide back effect to be dominant – some people changed the environment for the good, but once they leave it’s all down the drain. For me it is now interesting to see if a more value oriented approach, concentrating in the Why first, will show to be more resilient. But, no worries: The LKCE had quite some experience reports and more down to earth session in place! I was just more attracted by the other ones. 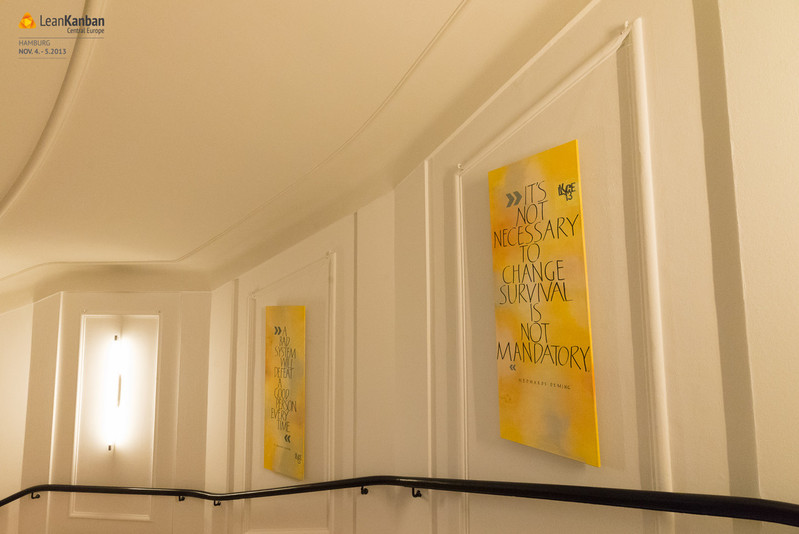 From my PoV; Kanban should take the whiteboard even more for granted on areas where it makes sense and thus get even more inclusive to the neighboring disciplines upstream, whoa are (for good reason) often not that process prone and conscious. I also don’t buy the dogma of “evolutionary change only” and I can not find it anywhere in the Lean literature. It is an Kanban exclusive and I think it makes no sense. IMHO, we practice small change to be fir for change in the big once we need it, due to external factors.

Overall, the LKCE is the best conference in the German speaking countries with great keynotes, valuable and diverse sessions, being far ahead in modern management thinking (for some possibly too far ahead and abstract). This, for me, makes it a regular entry in my calendar.

We’ll try to point to other write ups for LKCE13 on twitter once we know of them. Follow us here to get the tweets, or send us hints on conference reports in the comments.

Alle rights for the pictures with LKCE13!