This is the first of two small pieces on the impact of process. This one is more about how processes can make us blind to the needs of our customers and colleagues.

The next piece will be on the impact that process can have on who might work with us and who is left out. Choices of inclusion.

Maybe it’s just me, bute here are some memories of things that could happen. Once I had to do business with a real person at a bank (or worse: the post office), at a counter behind glass, here is what happened:

You want to enter a cheque (remember?). The guy at the counter would look at you – a lame smile between cynical and pity and despair – and he would go on doing “his duty”. He is facing this situation thirty-eight times a day. What he says is “signature”. You don’t know what he means. Blank stare. Again: “signature”. You know you have signed the form that goes with the check. But he repeats, now angrily, to “say“: “signature”. You are confused. You are missing the “please” or any other sign of affection or will to communicate. You are confused to the level of not knowing what feels worse: a) That you are in trouble, b) that this guy won’t explain what he actually wants or that you are being made the problem in this situation by a guy that is supposed to serve, to help you. And so on. You get my point. This guy is a dick. At least he behaves like a dick. And it seems to fine. He seems to get away with this. And in fact, he will get away with it. As: Because. This guy is following the rules, he is following the process. He cannot accept the check without the correctly filled out form. Simple.

Another situation you might have met is “I would like to help you, but THE SYSTEM does not support your request I am sorry”. Another cynical, sad smile from some official working somewhere in front of a computer screen. Some handwaving in the meaning of “I am also a victim of this situation and thee’s nothing more I know or can do now!” Or at the desk at the airport when something’s wrong with your flight and everyones waiting on you?

A completely different situation is, when someone at work gives you pressure: “I really need this from you now!” (Sure, what else?) And of course, “this” and “now” totally breaks with the chain of events that you had planned for today and basically ruins your day.

All of this has in common, that someone is acting like a dick towards you. And always with good reason. Because there is always a process in the background that needs to be served. Which again is a great excuse to act like a dick. Because, who would break this well thought out process? Being a dick now has an excuse.

And this happens, because the process is some compromise, a theoretical construct that works most of the times. And then it works like a charm. But if it doesn’t there will be blood. Somewhere. Each “edge case” becomes unsolvable. And everyone working inside that process becomes part of the process and serves the process and is not allowed to have a view on the whole but should simply be “doing your job” and not breaking the process. So, processes make great excuses for being a dick.

What happened is that once upon a time these people worked for a customer. Then the business was a success and well understood and finally a process created. A process to be more efficient and to do the same over and over again with less effort. Now the same people are working for a process. The actual purpose of serving the client gets lost.

It all starts with a naive, direct face-to-face transaction 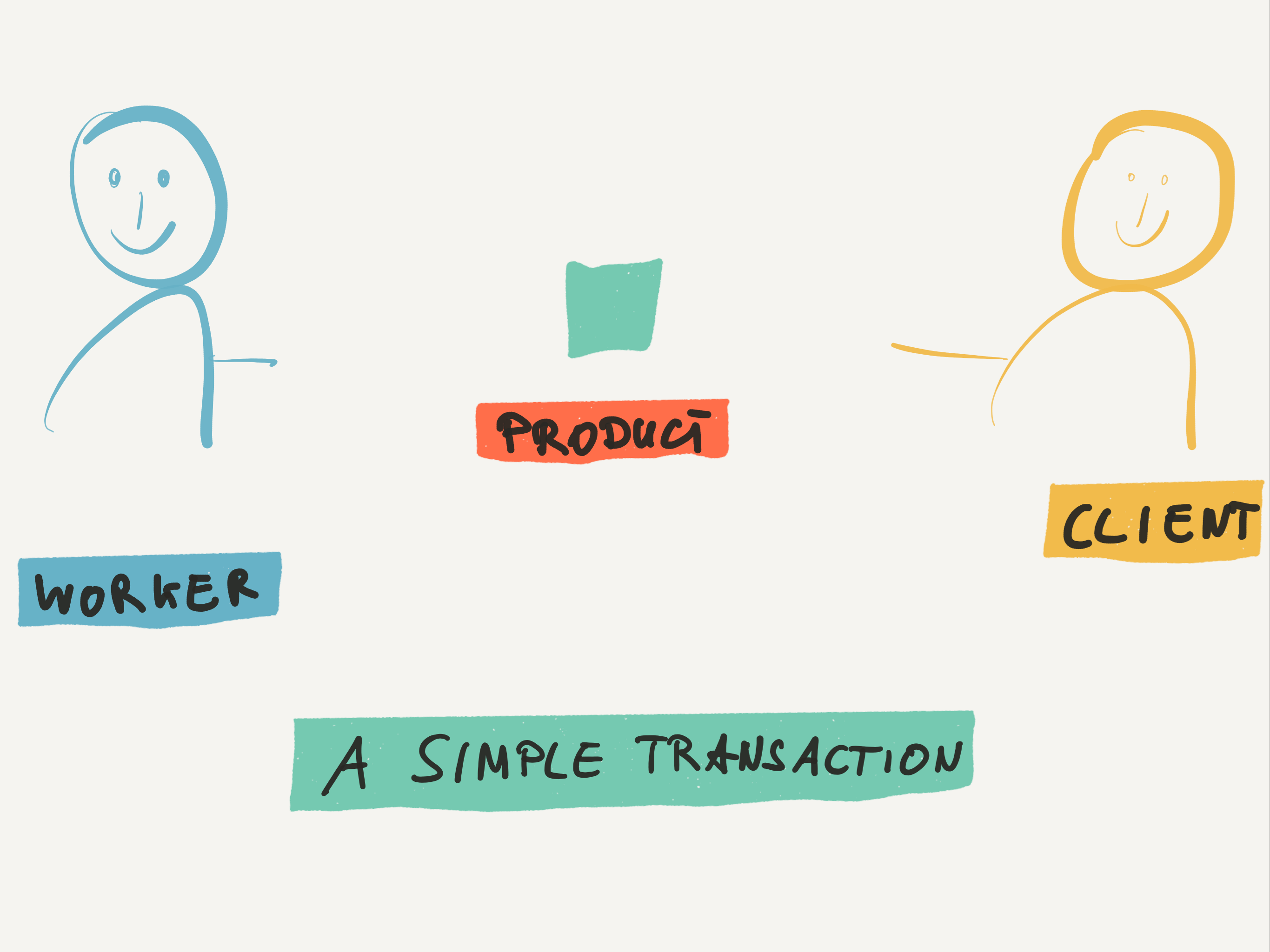 Client and our worker are happily engaged in a direct, unfiltered, naive transaction. “What do you want?” -”Fine here it is!” – “Thanks” 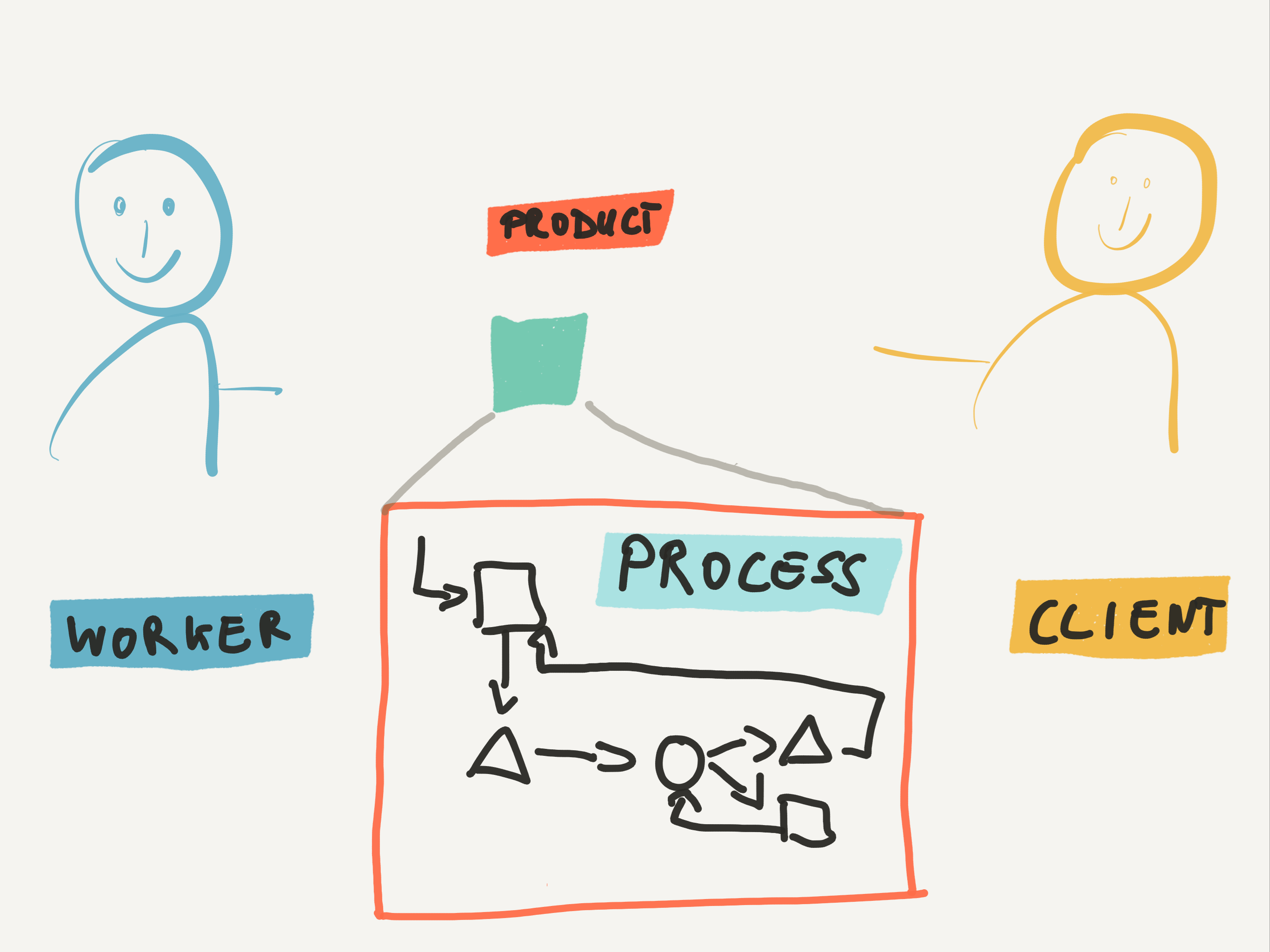 Of course, we must think about doing things cheaper and more efficient.

We finally replace the transaction with the efficient process 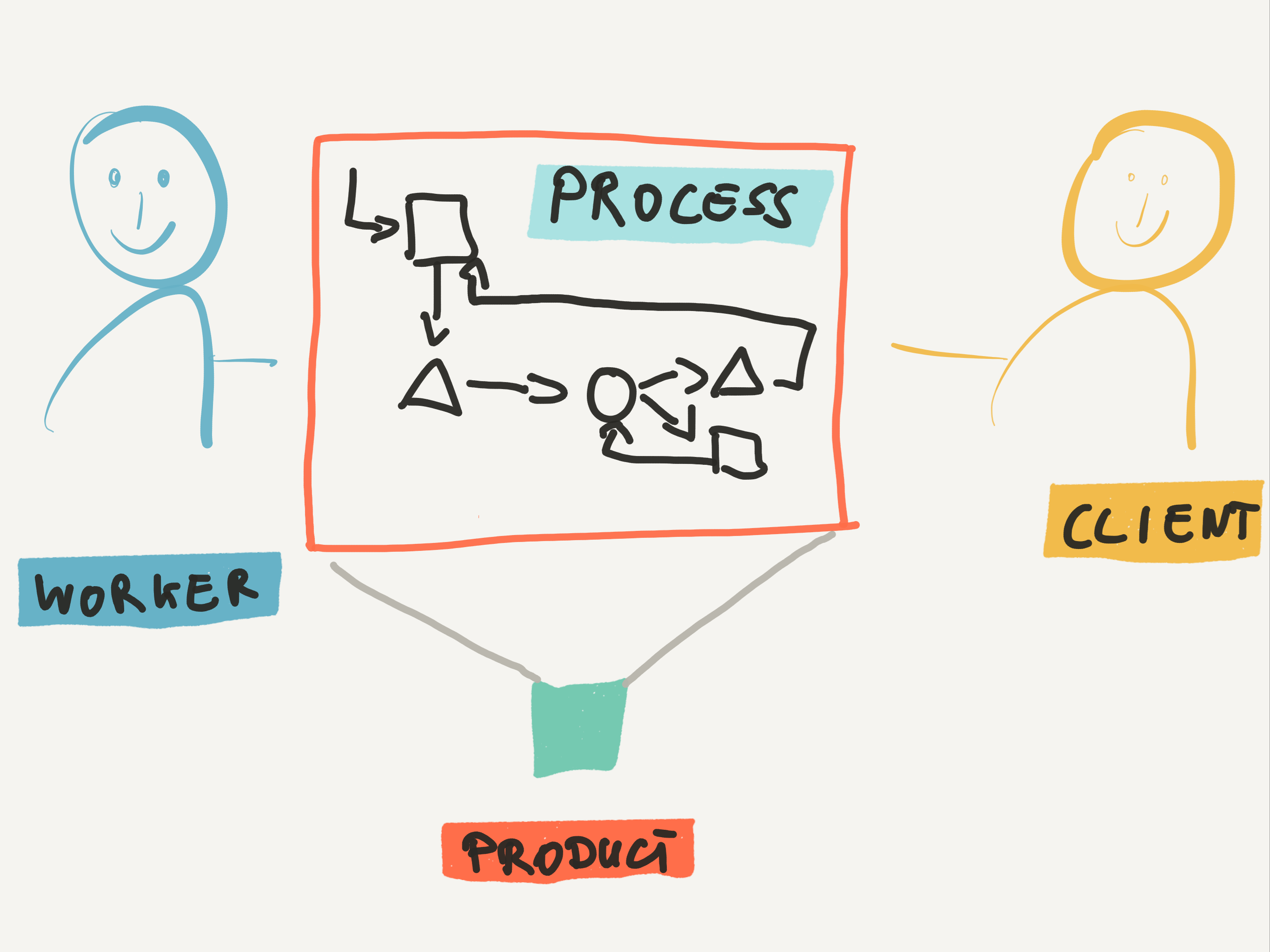 Now the worker works toward fulfilling the process. The desired outcome – a client with our product in his hand – is a mere side effect of the process. We turned things upside down.

It is the same among colleagues: Now it is not about the interaction and helping each other out, it is about the best compromise to efficiently serve a process. The artefact or work result and the interaction is now just a side effect to complying to a process.

Of course, it does not have to be this way. But we have to keep in mind that a process is a rule of thumb that often works and sometimes leaves people behind. And also we have to know that a process serves the aim of clarity and efficiency.

If we build or deploy a process we should always deploy a buffer of safety with it that people will not be left behind. We should take care of special cases, because we knew that the process was a compromise. Or we should have an oversight role in the background that has some power to give and take some leeway in the process.

When defining processes, make sure to observe the outcome

When we were still running around as tribes, which genetically is still quite the level we are at, there was always some “governing body” – e.g. the council of elders – that took care that people were not taking advantage of the tribe or acting foolish. In fact, the punishment for doing so was severe.

But nowadays, the elderly in our tribes – the companies we work in – are themselves the victims of the processes they had someone deploy and there is no counter force to those processes. Finally, often there is no force left countering the ever evolving power of the process left.

We need to know that writing down a sequence of predefined conditional steps (process) will lead to strange unforeseen side effects that might not always fulfil the purpose that those steps ultimately had.

It seems to me that whenever we divide labor – in processes, in silos, or both or anything else) we need to be aware that we always need to have some oversight function that reflects upon the outcome of the division of labor and compare that with the desired end result.

Disclaimer: I do like processes and I know we need them

I am not against processes. In fact, I also already have suffered from situations where no process was apparent and quite frankly I didn’t know what I had to do. Where whenever you thought you are done, another list of things to be done came up (e.g. my own wedding in which whenever we went to the registry office, a new list of documents to be produced came up whenever we went there.)

Also, I have total empathy and understanding for the person according to the process. He is simply doing his job. He is doing what he is told to do and incentivised for. In every situation above, to help the client means to have to expose oneself.

So, let’s be careful when breaking things down into a defined process and let’s take care that we have some form of oversight taking care the actual purpose is still served.