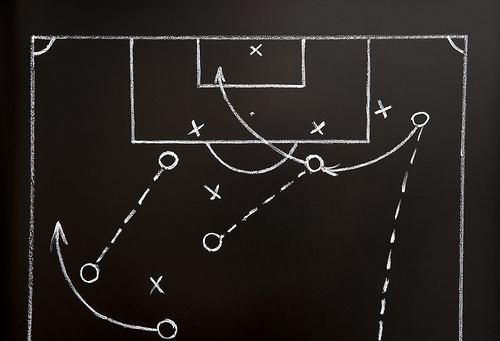 Once upon a time as a species somehow we discovered that breaking down big things and then collaborating on them makes sense and helps us do bigger things, have bigger impact. Fine! Great even! Not many species on earth can do that do the extent we do. (Of course that potential impact brings the burden of responsibility and we seem to do worse on that one than on the actual breaking down or coming up with ideas.)

The thing is: Breaking down big things and collaboration (team play from now on) are two sides of the same coin. We need collaboration after having broken things down. Because! First, we need to collaborate to pick up the pieces again and make one thing from it. Second: Because things can and will go wrong during breaking them down (splitting from now on) and later on as well.

This is the situation: 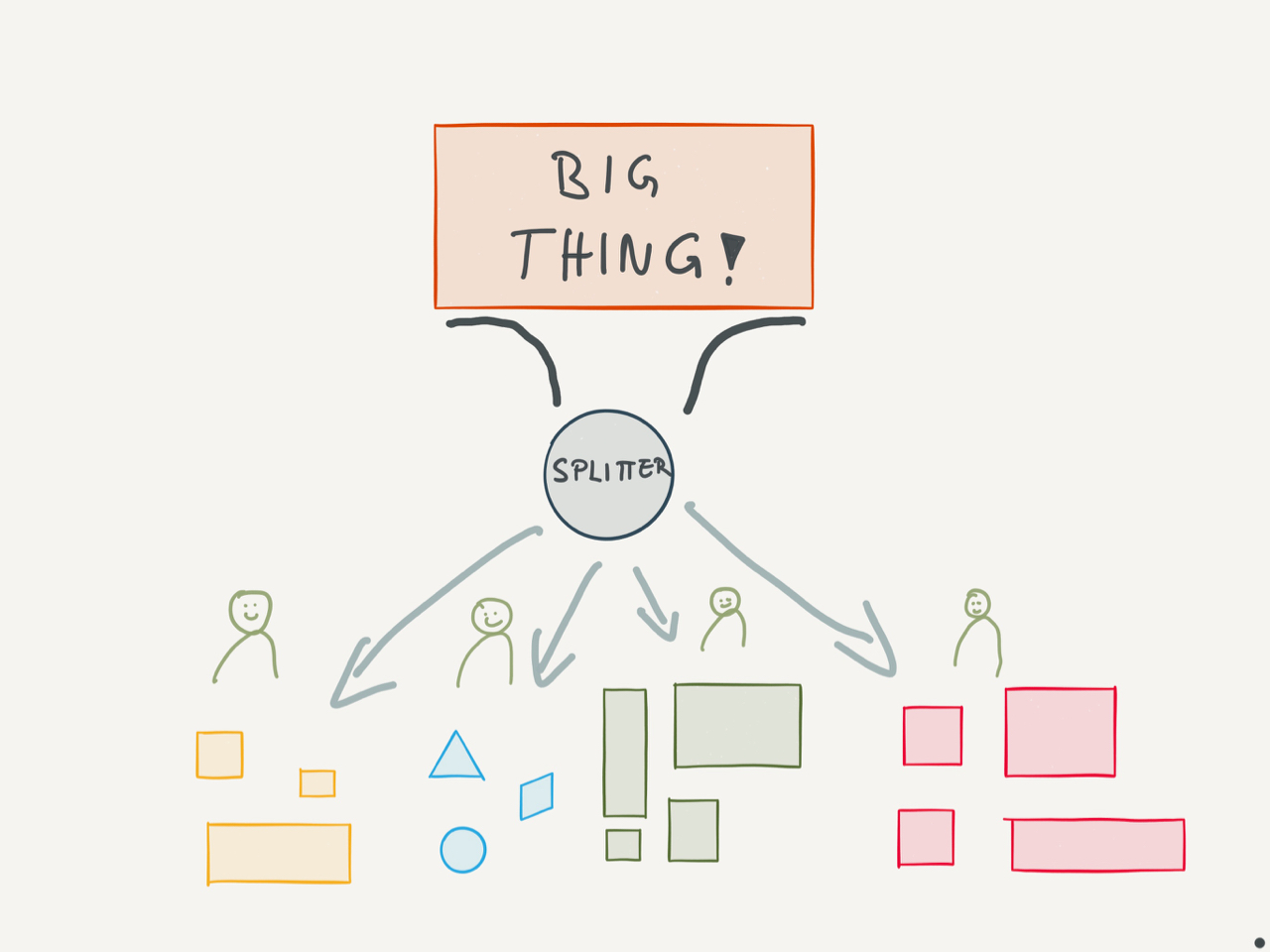 We have a big big thing: A product, our objectives (as in OKR), our company (maybe even the initial really big idea thing from our founder.)

We then split it into small little pieces through some sort of process. I call it splitter for the sake of simplicity. The big idea as well as the broken down pieces are ideas, models. So – things can go wrong, as I said. We need to have the same idea of the big thing as well as the small pieces. We need to have the same idea how things will fit together, how we get anything done. This complicated stuff, really! A warning: People are involved. And team play is needed.

Dangers of this whole idea are at least twofold again:

Also: Just like trust, team play is ephemeral and fragile, but worse: It’s hard to discover opportunities for improved team play in everyday life, especially in an abstract field like online products and services.

It’s much easier to talk about team play in other disciplines. So let’s start with that

Just like in our work, football works on models. Each trainer has his own model on how defence, offence, mid field work together and which position has which role. How offensive should defence be in which situation? These tactical models then define an ideal role of each position on the playing field. This is the standard, the theory.

If roles are really variable, they call it fluidity. (Hint: what would fluidity be in our world. I guess T-shapedness?)

And then the game starts – the real world. And each of the players has to improvise. Team play sets in.

To keep things simple, let’s say I am a left defender. I learn all the tricks to be a left defender, stabilise against whatever comes from the left. I have a zone and a position to stay in. But of course, things happen. To my right there is the inner defender. Now he stumbles. Team play sets in and I look around and if all fails, I, of course, leave my position and start a couragous run to the right to help out.

What’s happening: I watch for my team mate, I spot the aberration from normal, I look around, I decide to help out (including leaving my trained position).

The same goes on on a different level: Defense helps midfield and strikers, and all the other ways. So, to find those opportunities, I have to forget about my planned task and have to improvise. Tadaaah!

All we have in ming is the big thing: The idea of the game, the result and we we have to do now to get it done. Whatever theory (tactics, splitting) told us.

In product development – sadly – things are more abstract, less tangible and thus much harder to experience.

We have three devs: One for iOS, one for Android, one for mobile web experience. (We don’t talk about the big thing yet, do we?)

Now we have a sprint planning, replenishment meeting, <fill in your favourite “planning” or break down into tasks or whatever process>.

This normally (with that I mean: in most cases) results in three people with individual tasks for everyone. If everything works fine, we have three great mobile channels in the end. If everyone works up to plan, everything works out. The first “but” is that this never happens. The second “but” is that even if it works on first sight, we still waste potential.

I am sure that there are opportunities for an overall experience left out:

Often, I talk to perfectly organised teams and the answer I get is: We are that perfect team, everything is balance, we don’t need to talk to each other. And, often, I am looking for the error in the system. And here it is:

We have to zoom out: The team is responsible for the development and the coherence (hopefully from a client perspective) of the mobile channels as a whole. Only when zooming out to the platform, can we discover opportunities for improvement of the team play.

What’s happening is that after breaking down things, people are only seeing this part of the picture:

But on this level we can neither judge nor detect team play, let alone find opportunities to improve. For that, we need to zoom out to the level of the big thing and always think about that level and how things will fit together and how and if I have to leave my position to improve the big thing, often abandoning the plan.

Where in the system of the mobile channels are incoherences, how can we discover them, how could we make the whole thing terrific and how can we help each other.

Just like in the case of the defence, often times not keeping the position means team play. Often times, looking for the gaping hole in the defence formation and quickly running those 20 meters is the thing to do (and then hoping a mid fielder will fill in, or even a striker.)

In the case of our team: Of course, the Android guy can help the iOS guy when under pressure. Even if he can’t help coding. He can at least “hold hands”, help by pairing, cooking a coffee, googling solutions … he is not dumb in the end. Sure, Android will suffer – but isn’t that the point of team play? What I often get to hear now is “this isn’t efficient”. Of course, the Android guy is not perfect in iOS, but he will get something. Just like sprinting those 20 yards to the other side of the defense (in the above football example) sure isn’t efficient. But it can be effective as hell: We don’t catch a goal, probably. And yes, there was a mistake before – otherwise the holy wouldn’t have shown up.

Let’s transform the whole thing to the next level! Our big thing is probably just a piece of an even bigger thing. See how little our Big Thing is in this Huuuge Thing endeavour? It sits right there in the lower left corner, hard to notice. 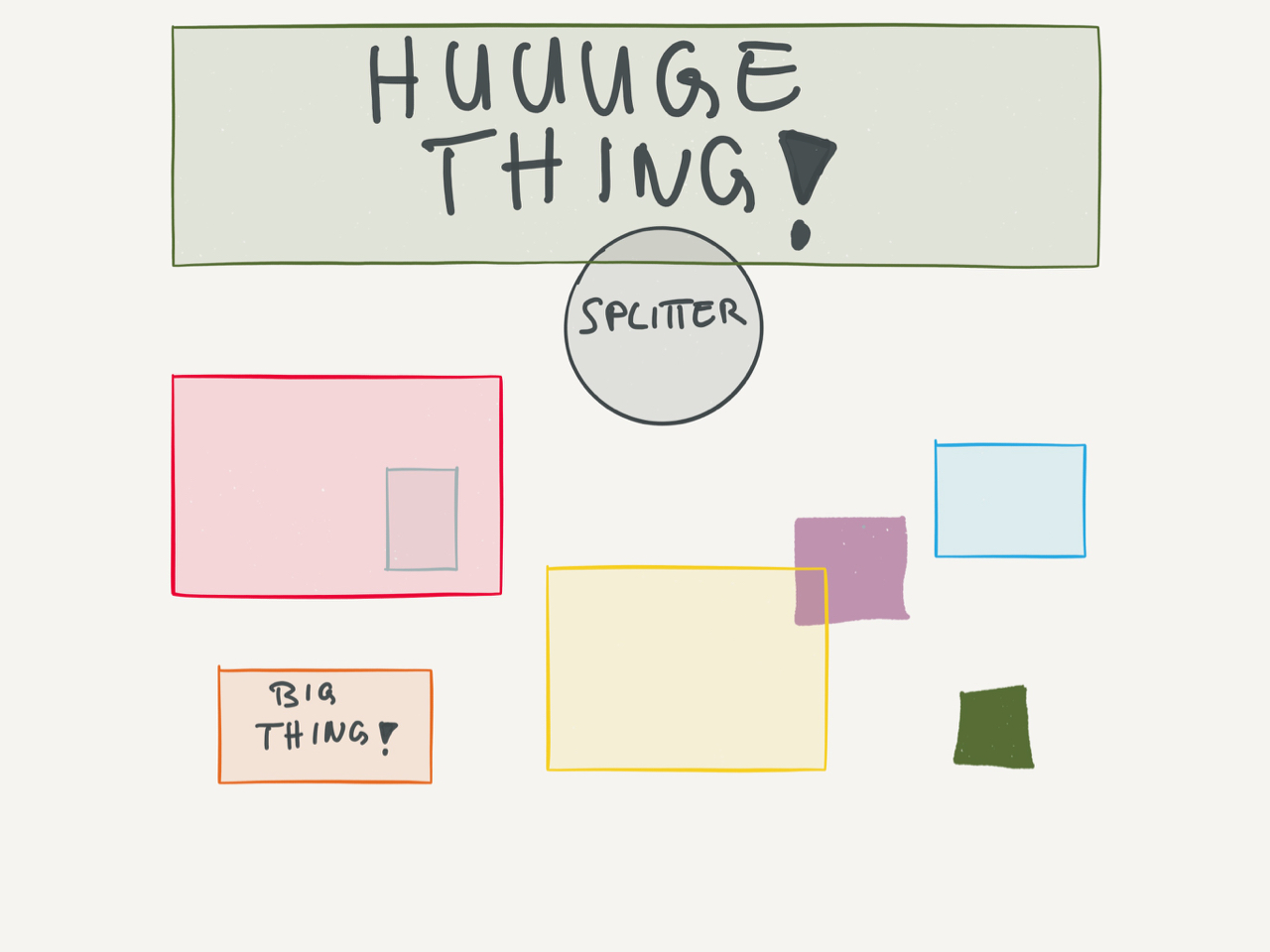 Now the problem would be: How could eight product owners be a team and work on a huuuuge thing? While many organisations go all the way to organise the POs around dead certain responsibilities (and it is fine with me), what we sometimes have to do is help out and make clear again that all of us are responsible for the whole product:

I might help out in the design studio of the B2B guy, I might review the concept of the “search” guy. Or I might ask for help on understanding the options of integrating that strange service that our partner X offers since a couple of weeks. Again, in discovering and helping out, the only thing that helps is move up the ladder a bit, zoom out and say: what would the huuuge thing require us to do. And then we do that – whatever my role (aka position in defence) says.

In real life, to discover those opportunities can be terribly difficult: For one, we don’t see them in our everyday work without zooming out.

But socially it is also awkward to challenge the existing level of team play. Everyone is doing his job after all and we have nice coffees together and all – who would want to spoil that.

But believe me: Once you start looking for those improvements in team play, you can get addicted! Try it.

What helps is frequent, in depth team meetings, by the way. more help comes from explicit, visual alignment of the playing field, like Story Maps, Wardley Maps, whatever helps to visualise the thing we are responsible for together. But that will be the next post, and the next one, I guess.