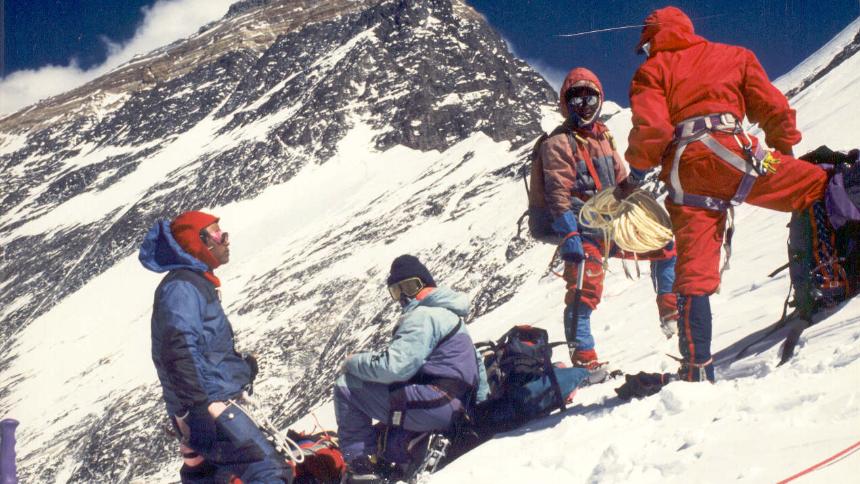 Extremes that we approach define what will be normal tomorrow. Embracing extremes and finding room for them is the most normal and basic way to innovation: Personally, in companies and in society.

I was 13 years old. Aldo Moro was killed by the Brigate Rosse in Italy. A military coup in Afghanistan changed the government and that led to a change in politics around Afghanistan – hope for peace. Once again. The first German Astronaut will soon depart to space. First rumours of a new, rough music comes to my ears in the little town I grew up: Punk seems to emerge.

But for me it meant: Reinhold Messner made the Mount Everest without oxygen. Today, we have no clue how radical it was at the time. Doctors told him he won’t make it. He wouldn’t survive. And would he’d survive, he would come back as an idiot. Because: His brain would be severely damaged.

None of us can imagine what it means to start that endeavour, let alone to pull it through. Any of such actions has a moment of no return, where it is totally clear and explicit that now you have to commit. From here on you two options: You make it or you fail. If you fail, you die.

What was Messner thinking?

The Everest, of course wasn’t Reinhold Messner’s first ‘decisive moment’ of radical clarity. At the time he had already revolutionised climbing around his home mountains, the Dolomites. Then, he revolutionised climbing in the higher altitudes of the western Alps. And then he discovered high altitude climbing in the Himalayas (and then throughout the world and then … ). Each those revolutions had decisive moments, backed by lots of ordinary everyday training.

How one event changes everything

What Messner and Habeler did, changed everything in climbing. While none of us could have done this, it changed how climbing was approached. The radical breakthrough was the way Messner approached high altitude climbing in what was called the “death zone”: The approach until then was to come with tons and tons of equipment. Then, the mountain (seen as the enemy) would be “attacked” by carrying that luggage up from camp to camp, piece by piece, by a huge team of carriers and climbers.

What Messner changed: He wanted speed and thus he wanted to carry less. He approached the Everest “simply” as if it were a mountain in the alps (alpine style). Few, light baggage. Habeler and him, a backpack each in the decisive phase.

That again changed, how we think about approaching the Alps. To mention the next “extreme”: Nowadays, we run up (and down) the mountains in light running shoes that our parents told us we need heavy mountain shoes (and outdoor equipment companies will still tell you so.)

Once it was done, it will be repeated. And eventually it will become The Normal. Done, repeated, normal. Looking beyond the edges of what is possible today and trying to go s step further, shapes what will be normal tomorrow.

Why the extremes matter for us

I get it: I am not Messner and you are not Messner. But, who cares? It doesn’t matter if you revolutionise climbing or any other sport or discipline. What matters is that you take a careful look at the edges of what you think is possible for you. And then, you approach that edge step by step and again and again. Until you dare to cross the boundary into the unknown. Now it’s just a tiny step. A step that will expand your possibilities of what you can do. And again.

Why extremes matter for companies

If companies stop thinking the unthinkable and stop approaching the boundaries of what they can to, they and up as zombies and eventually die.

Companies need to have “cells” that think the unthinkable and approach it. Safely.

Lean knows the concepts of Kaizen, and less known, kaikaku. That is incremental change and radical change. We need radical change (kaikaku) to find new places and possibilities. And then we need evolutionary change (kaizen) to hone and refine these new places. One does not work without we other. Make this duality core knowledge of your organisation and work on structures to support both.

It is reflected in Peter Drucker saying:

“The purpose of business is to create and keep a customer.”

Create a customer is “going new places”, keeping him is “honing the experience”. Pone does not work without the other.

It is also reflected in Russell Ackoff saying

Why extremes matter for society

Society is defined by the constant search for extremes that challenge who we are, how we think and what we can do.

I’d like to encourage you for yourself, to embrace finding new places as well as honing your known places. Find your own little Messner inside of you and embrace it! What are your small extremes that you’d like to approach next to define who you or your company will be?